I’m sorry, but this is all still kind of hilarious to me. North Korea is like the weird, idiotic, not to mention slightly-psychotic cousin that you never want to talk to but you feel you must because, one day, they might take an assault-rifle to a Chuck E. Cheese’s or something batshit crazy like that. Or, maybe they decide to take people out that were mean to them and in the middle of their rampage, when they spot you terrified with fear, they remember you as “The Nice Cousin.”

What are we to do about them? 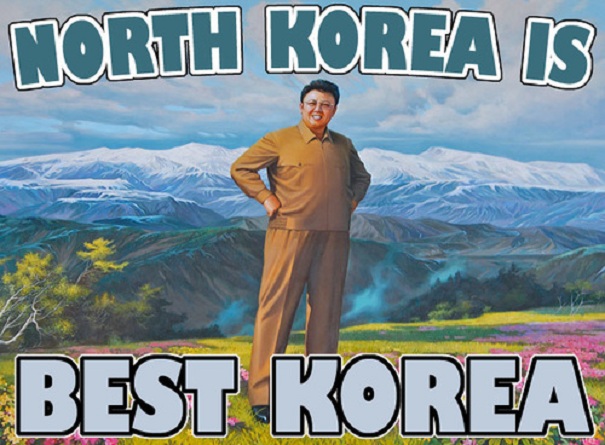 WASHINGTON (AP) — The Pentagon announced Friday it will spend $1 billion to add 14 interceptors to an Alaska-based missile defense system, responding to what it called faster-than-anticipated North Korean progress on nuclear weapons and missiles.

In announcing the decision, Defense Secretary Chuck Hagel said he is determined to protect the U.S. homeland and stay ahead of a worrisome North Korean missile threat. He acknowledged that the interceptors already in place to defend against potential North Korean missile strikes have had poor test performances.

“We will strengthen our homeland defense, maintain our commitments to our allies and partners, and make clear to the world that the United States stands firm against aggression,” Hagel told a Pentagon news conference.

He said the 14 additional interceptors will be installed at Fort Greely, Alaska, where 26 already stand in underground silos, connected to communications systems and operated by soldiers at Greely and at Colorado Springs, Colo. The interceptors are designed to lift out of their silos, soar beyond the atmosphere and deploy a “kill vehicle” that can lock onto a targeted warhead and, by ramming into it at high speed, obliterate it.

Hagel also cited a previously announced Pentagon plan to place an additional radar in Japan to provide early warning of a North Korean missile launch and to assist in tracking its flight path.

A portion of the $1 billion cost of the expanded system at Fort Greely will come from scrapping the final phase of a missile defense system the U.S. is building in Europe, Hagel said. The system in Europe is aimed mainly at defending against a missile threat from Iran; key elements of that system are already in place.

Tom Collina, research director at the Arms Control Association, applauded the decision to scrap the final phase of the European system, calling it an addition that “may not work against a threat that does not yet exist.”

The decision to drop the planned expansion in Europe happens to coincide with President Barack Obama’s announced intention to engage Russia in talks about further reducing each country’s nuclear weapons arsenal. The Russians have balked at that, saying Washington must first address their objections to U.S. missile defenses in Europe, which the Russians see as undermining the deterrent value of their nuclear arms.

Collina said the Russians may be more willing to talk about nuclear arms reductions now that the Obama administration had decided not to go forward with the final phase of its European missile defense system.

Hagel cited three recent developments in North Korea that prompted the Obama administration to act, including a nuclear test in February deemed reckless by Washington and condemned by the United National Security Council.

Hagel also cited Pyongyang’s launch in December of a rocket that put a satellite into space and demonstrated mastery of some of the technologies needed to produce a long-range nuclear missile. And he noted that last April the North Koreans put on public display a road-mobile intercontinental ballistic missile, the KN-08. Navy Adm. James Winnefeld Jr., vice chairman of the Joint Chiefs of Staff, said that missile is believed to be capable of reaching U.S. territory. Winnefeld appeared with Hagel at Friday’s news conference.

Although not mentioned by Hagel, the North Koreas raised tensions further by threatening last Thursday to pre-emptively attack the U.S. Among its recent declarations, North Korea has said it will no longer recognize the armistice that ended the 1950-53 Korean War, though it has made such remarks before.

Republicans in Congress have criticized the administration for deciding several years ago that the North Korean missile threat did not justify expanding the interceptor fleet at Greely. Rep. Howard “Buck’ McKeon, chairman of the House Armed Services Committee, said Friday the administration was guilty of “looking at threats through politically tinted glasses. Now that the administration has decided to see clearly, America can get back on the right course.”

Winnefeld said the administration is seeking to make clear to new North Korean leader Kim Jong Un, grandson of the country’s founder, Kim Il Sung, that he would lose catastrophically by attacking the U.S. or U.S. allies.

“And we believe that this young lad ought to be deterred by that. And if he’s not, we’ll be ready,” Winnefeld said.

By personally announcing the expanded U.S. missile defense plan, Hagel appeared eager to instill confidence among Americans that they would be protected in the unlikely event that North Korea launched a strike.

“The American people should be assured that our interceptors are effective,” he said.

The missile defense system was first fielded by the administration of President George W. Bush in late 2004. It has a spotty test record and has never been used in actual combat. In addition to the 26 interceptors at Greely, the system includes four interceptors at Vandenberg Air Force Base, Calif.

Hagel said the 14 additional interceptors should be in place at Greely by September 2017 but not before they have been adequately tested.

James Miller, the undersecretary of defense for policy, said the project would cost about $1 billion.

Miller and Hagel said the U.S. will conduct environmental studies on three additional potential locations for interceptors in the United States, including on the East Coast, as required by Congress. Hagel said there has been no decision to build additional missile defense sites.

Rep. Michael Turner, R-Ohio, a vocal critic of the administration’s missile defense and nuclear weapons policies, called the building of an East Coast missile defense site “the next logical and prudent step to ensure we can counter the rising threat to the homeland.”