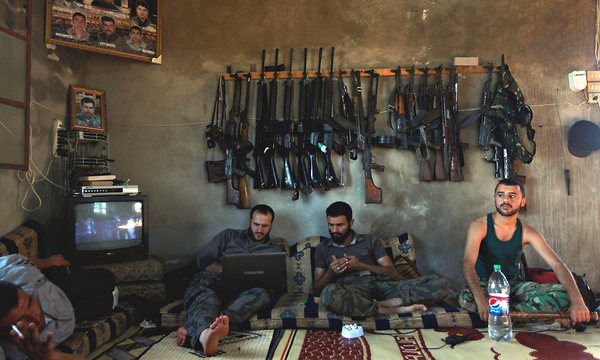 WASHINGTON (AP) — The Obama administration is rethinking its opposition to arming the rebels who have been locked in a civil war with the Syrian regime for more than two years, Defense Secretary Chuck Hagel said Thursday, becoming the first top U.S. official to publicly acknowledge the reassessment.

During a Pentagon news conference with British Defense Secretary Philip Hammond, Hagel said arming the rebels was one option that the administration was considering in consultation with its allies. But he said he personally had not decided whether it would be a wise or appropriate move.

“Arming the rebels – that’s an option,” he said. “You look at and rethink all options. It doesn’t mean you do or you will. … It doesn’t mean that the president has decided on anything.”

Hammond said his country was still bound by a European Union arms embargo on Syria, but he said Britain would look at the issue again in a few weeks when the ban expires and make a decision based on the evolving situation on the ground.

Hagel’s comments affirmed what had been a quiet but emerging dialogue within the Obama administration: That arming the rebels might be preferable amid growing indications that the Syrian regime has used chemical weapons against its own people, an action President Barack Obama characterized as a “game-changer” that would have “enormous consequences.”

Asked for his thoughts on the evolving issue, Obama said Thursday that the U.S. will continue to evaluate its options.

“We want to make sure that we look before we leap and that what we’re doing is actually helpful to the situation as opposed to making it more deadly or more complex,” Obama said at a news conference in Mexico.

Both Hagel and Hammond also indicated that strong evidence still was needed to provide a solid legal basis for any military action the U.S. or its allies might take. While neither would detail the evidence already collected from several reported incidents of chemical weapons use by the Bashar Assad regime, Hammond said the public still remembers that claims of weapons of mass destruction in Iraq in 2003 turned out to be untrue.

“There is a very strong view that we have to have very clear, very high-quality evidence before we make plans and act on that evidence,” Hammond said. “If there were future use of chemical agents, that would generate new opportunities for us to establish a clear evidence of use to a legal standard of evidence.” 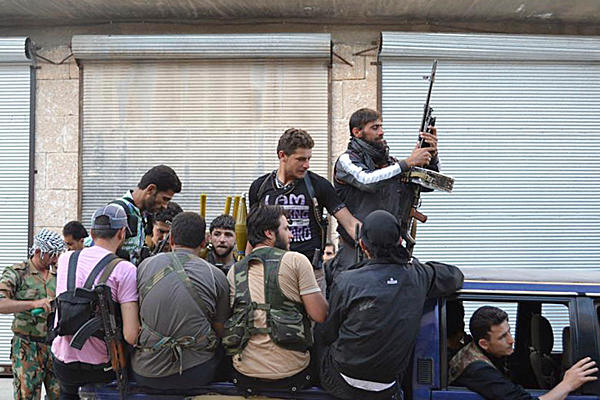 Officials have said that intelligence assessments of the use of sarin gas in Syria are based in part on “physiological samples,” which could include human tissue, blood or other body materials, in addition to soil samples. Asked whether the U.S. and Britain have separate samples or are examining the same material, Hammond declined to specify, but said the two countries were working closely on the analysis.

Hagel said each country uses its own intelligence agencies but works to share information with allies.

Administration officials said Wednesday that arming the opposition forces was seen as more likely than any other military option. They cited U.S. intelligence beliefs that the rebels may be distancing themselves from the al-Qaida-linked group there. The officials spoke on condition of anonymity because they weren’t authorized to discuss publicly the options under consideration.

Some senior leaders, including Gen. Martin Dempsey, chairman of the Joint Chiefs of Staff, have been publicly skeptical about the wisdom of arming the rebels because of concerns that U.S. weapons could end up in the hands of al-Qaida-linked groups helping the Syrian opposition or other extremists, such as Lebanon-based Hezbollah.

But officials say there is a growing realization that, under increasing pressure from Congress and other allied nations, the U.S. might soon have to do more for the Free Syrian Army.

The administration announced last week that it believed Assad has used chemical weapons but said the intelligence wasn’t definitive.

Damascus has denied it has used chemical weapons, saying the Syrian rebels were trying to frame the regime.

“I think we have a great deal of knowledge of location of chemical weapons,” Hammond said. “That is not the same as saying that I can put my hand on my heart and say we know where every last item is.”

Other military options under discussion include creating a no-fly zone over the country or a limited safe zone where Syrians could be free from violence. There has been little appetite for putting U.S. military boots on the ground in Syria.

Syria’s two-year civil war has left an estimated 70,000 people dead and hundreds of thousands of refugees.